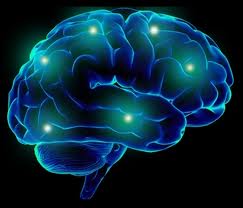 Mastery of our minds is essential to living in alignment with our highest, selves, i.e. with Love. Such mastery  involves working intentionally, creatively, and consistently with our brains.

Our three-pound brains, composed of  85-100 billion neurons, each with about 10,000 synaptic connections are completely malleable and plastic. We can train our minds to change the physical structure and the function(s) of the brain. If we continually pay attention to, and purposefully direct our thought processes we can gain tremendous self-knowledge. Until we begin to consistently work with the dynamics of our longstanding habits, belief systems, points of reference, and patterns, these processes run us. The brain defaults to what is familiar, not necessarily to what is healthy and growth producing.

We can shape, reshape, and mold our malleable brains like modeling clay to deliberately foster optimal growth and transformation. The terrain of the brain stands at the ready. We just need to pick up the tools and work methodically.

Neuroplasticity, is the capacity of neurons, primary nerve cells, and neural networks in 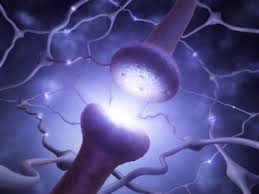 the brain to change their connections and behavior in response to new information, sensory stimulation, development, or dysfunction. Neural networks can reorganize themselves. The brain’s physical makeup changes when it’s exposed to new information.

Changes in brain physiology —reorganization of  neural synapses and pathways, takes place throughout our lifetimes. Neuroplasticity happens continually as you learn and memorize new data, and as your brain develops.

Synaptic pruning, which is the way the brain deletes the neural connections that are no longer useful (apoptosis), happens simultaneously even as the brain deepens and strengthens the necessary neural pathways. In the best case scenario, neuroplasticity is a way for the brain to fine-tune itself for efficiency.

The cognitive restructuring simulations used in our community-of-practice prompt the  brain to prune out neural connections that no longer serve us and deepen those which bring us into closer alignment with larger consciousness.

Neuroscience can now see our brains at work and understand how physiology and psychology interact! Neuro-linguistic programming (NLP)  is the study of how language 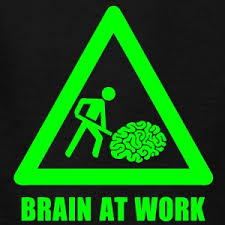 intersects with our neurological processing to create our experience of the world. We can deliberately use language:

to create a map that indicates and determines what parts of our brains are activated at any given moment. An intent of the community-of-practice is to deliberately interpret and then guide this process so as to maximize growth.

The subconscious (personal unconscious) and unconscious mind are the true drivers of our life experience. We can learn how to purposefully speak the language of  the unconscious and input data that enhances wellbeing.

The Map is Not the Territory

A hallmark catch-phrase in the field of neuro-linguistics is, “The Map is Not the Territory.” In other words, human beings as consciousness themselves, cannot fully know the reality of the larger consciousness frame of which they are a part. We can however become aware of and continually work to expand our perceptions of reality and our maps of the world.

We grasp, order, and process our experience of the physical dimension of the world primarily through our sensory representational systems. Our experience is then encoded 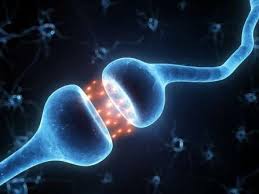 in our neurological system. It’s through our encoded map of reality that we make meaning out of our experience which then generates our behavior. It’s not “reality” that limits us or enables us, but rather the degree to which our own map of reality is limited or expansive.

The people who are most effective are those whose map of the world opens them to perceiving the greatest number of available choices and perspectives. Our goal then is to create the richest, most comprehensive map of which we are capable ─one that honors the interconnectedness of ourselves, others, and our environment. The practice of Cognitive Restructuring is a way of enhancing the choices we have and perceive as available.

The practice of cognitive restructuring uses the science of neurolinguistics to “recode” the way the brain responds to stimuli in order to manifest new, healthier behaviors. Neurolinguistics is a system of interpersonal communication that helps us understand the relationship between successful behaviors and the thought patterns underlying them to foster greater self-awareness and self-efficacy.

We work creatively with the three elements that have the greatest impact on the production of human experience: neurology, language, and enculturation.

How Are Neural Pathways Created and Reinforced? 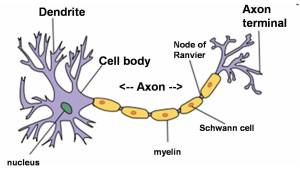 The neuron is a nerve cell which is the primary functional unit of the nervous system.  Our brains contain around 85 -100 billion neurons. The structures extending from the left side of a neuron that look like tree branches are called dendrites. Dendrites receptors are the area where neurons receive most of their information.

Dendrite receptors are designed to pick up signals from other neurons in the form of chemicals called neurotransmitters. Neurotransmitter signals picked up by dendrites cause electrical changes in a neuron that are interpreted in an area called the soma or the cell body.

The soma contains the nucleus. The nucleus contains the DNA or genetic material of the cell. The soma takes all the information from the dendrites and puts it together in an area called the axon hillock. If the signal coming from the dendrites is strong enough a signal is sent to the next part of the neuron called the axon. At this point the signal is called an action potential.

The action potential travels down the axon which is covered with myelin, an insulatory material that helps to prevent the signal from degrading. The last step for 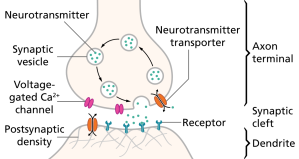 Most communication between neurons occurs at a specialized structure called a synapse. A synapse is an area where two neurons come close enough to one another that they are able to pass chemical signals from one cell to another. The neurons are not actually connected, but are separated by a microscopically small space called the synaptic cleft.

Once they are in the synaptic cleft, neurotransmitters interact with receptors on the postsynaptic membrane. They bind to these receptors and can cause an action to 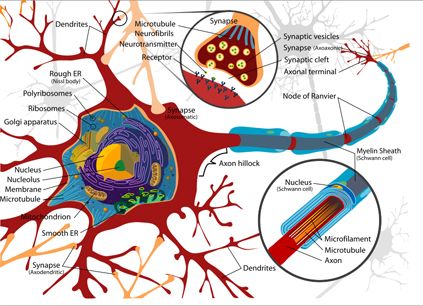